An alternate title to this post could be "The Mechanisms of Zombification."

I'll be talking about the undead, how mine stack up, the science behind my choices and so on.

Full details after the JUMP: 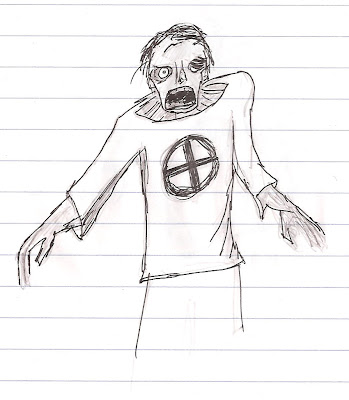 Art of 'Diary of a Second Life' Part I

When I decided that this book would be a diary being kept by a teen, it occurred to me that there maybe should be some illustrations.  I've created maps for my other books, so why not this one?  Making them hand drawn in a notebook also leads to the idea that the character might want to draw other stuff, too.

I momentarily considered getting a talented friend of mine to draw the things I wanted to see or have illustrated, but then I thought there was no reason that my character should be a post-apocalyptic Leonardo da Vinci.  So, Wess Marin sucks at drawing, just like me.

A few spoilers will appear after the JUMP, but I'll be saving the really big spoilery pics for another post. 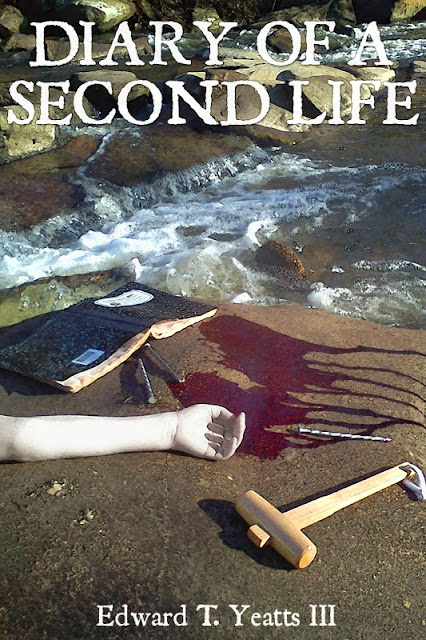 Three hundred years after the end of the world as we know it, young Wess Marin feels compelled to leave his insular community and strike out in hopeful desperation on his own. He aims to stop the menace that still ravages mankind, but on his way, he will encounter terror, both from the living and the dead. Wess finds a gleaming city, but will they help him realize his goal?

Join this young adult on an adventure of self discovery. Armed only with a blade and his wits, Wess must traverse many wild miles to bring about an end to the Darkness.

The persistence of hope, the triumph of will over adversity, the denial of superstition ... to achieve these things, Wess must fight the inhumanity of some, the horror of others and his own doubts.

The story is set far in the future - around 300 years after the end of the world and life as we know it. Wess Marin is a boy about to turn sixteen who lives in a small village of approximately 100 people or so. The people live a simple life down in tunnels for the most part - sheltered from the sun. No, they aren't vampires, but being in the sun increases their hunger levels for food to such extremes that they will starve if they stay out for too long.

Wess has never been outside the walls of his keep and doesn't know what exists except for what he sees each day. He is just finishing school and is now expected to "bond" with Remi, his second cousin, to perpetuate society through having children and becoming a watcher - a person who walks the walls to protect the community from the "terminals" which are basically zombies. Terminals can be people or animals or even insects - ick!
...
Wess has decided that he is going to go in search of others who may be working on a cure for the sickness and find what he is searching for as a person.

The story covers his journey - what he finds outside the walls, who he encounters, and what he learns about himself as a person.
...
Wess is the only character that is truly developed but that works out fine for the book as it is his path to discover that the story is about. The rest of the characters are truly supporting ones that interact at the level necessary to help Wess on his journey.
...
A thoughtful read and different take on what happens when the world ends. I would recommend this for a change in pace from the "normal" zombie books."
-- RandiTS (spoilers redacted)

"The book was interesting and kept me reading to the end ... I always wish for more exploration of the "old" world in these kind of book, for the most part they get from A to B without any. Different communities of people, living different kinds of lives in 300 years.
A good bargain for a good story."
-- Dennis

"At first I had some doubts about this novel but they were truly unfounded. I started reading a little of the story, then a bit more only to find that I'd finished the thing in very short order. The story kept me stuck to each word and was incredibly easy to finish. I finished it a little too fast because this story is worth savoring every paragraph. The journal format of the novel gave the story a feel similar to that of "Dracula." The diary also gave the reader a more personal connection to the narrator.
...
The characters were fascinating too. It starts off with the voice of a fifteen year old boy and then adds more people along the way.  ...  I found the characters realistic and genuine. There isn't anything cookie cutter or contrived about them. Excellent character crafting!

"Diary of a Second Life" was a great read and one of most creative stories of the post-apocalyptic genre."
-- Lori Bowland, Living Dead Media (spoilers redacted)


READ MORE ABOUT DIARY OF A SECOND LIFE ...

"Art of" Part 1, "Art of" Part 2, the geography of Second Life, and comparing/contrasting zombies (and the science of them).

Time's about here.  My next novel (more horror than scifi, I guess) will be published very soon, but I thought you'd appreciate another look or two at it.  (If you missed the first chapter I posted, click here.)

You'll be introduced to the main character, Wess, and then you'll get a better idea what those nails are for.

Spoilers after the JUMP! 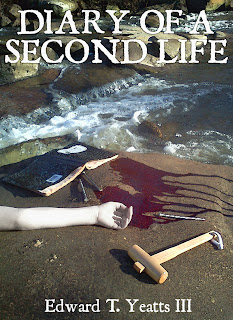 Covers: 'Diary of a Second Life'

My new book is coming soon, so that means I have to craft a cover for the thing.

It's called Diary of a Second Life, so a diary of some sort needed to be featured.  I got an old school, marbled-covered composition notebook and soaked it in tea to color the paper and age it.  If you've read that mighty frakked up chapter, you know there's something creepy going on with hammers and nails, too.  My son and I mixed some food coloring and corn syrup up, gathered the other stuff and walked down to the creek near our home.  It was a fun afternoon, getting my son to pose lifelessly next to a pool of blood on a rock by a moderately swollen water source.

So, here are the four covers I've made.  These won't be final; I'm sure to tweak the winner some more.  (Click to enlarge them, of course.) 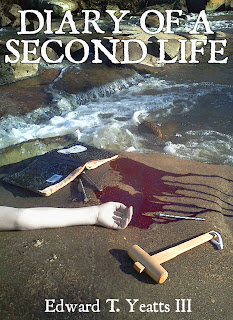 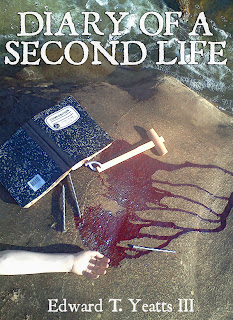 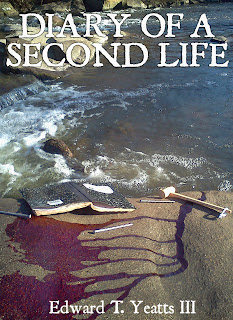 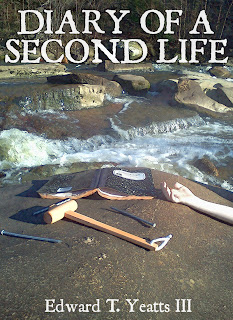