This is the state of things now: 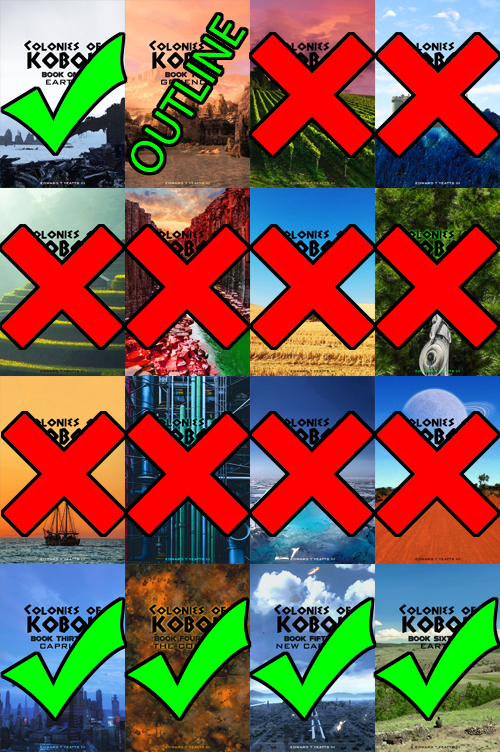 Yes, I've finished Book Sixteen: Earth.  It was weird writing the end of the entire Kobol-verse saga, as well as the last appearances of William Adama, the Messengers, et al, and knowing that I still had something like two-thirds of these books left to write.

So, now that I've finished the end, I have to rewind to the beginning, as it were, of the Twelve Colonies: 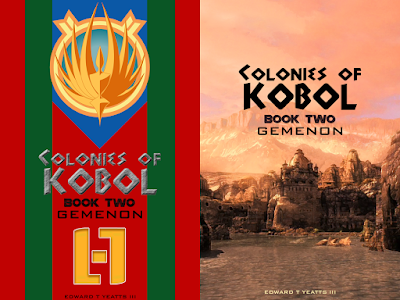 If you'll recall, at the end of Lords of Kobol - Book Three: The Final Exodus, the assistant to the late President Stephen Acastus, Alexandra Gideon, was left in charge of the exiles from Kobol.  Book Two of Colonies of Kobol will pick up with their entry into the Cyrannus System, landing on Gemenon, and establishing the first settlement there.  The second half of the book will fast forward a bit and show us some of the religious division that marks Gemenon's history.

As you saw above in the SITREP graphic, I have outlined Book Two.  Meaning, I have a chapter-by-chapter idea of what's going to happen in the story.  From experience, I can tell you that this is highly subject to change (most often, in the direction of getting bigger). 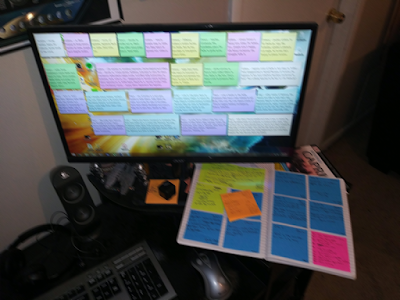 No; your eyes aren't failing you.  I've digitally blurred it to conceal details.

On the screen, you can see the digital "Post-Its."  Each one represents a chapter with different colors representing different characters (white for the Messengers, pink for Gideon, etc.).  Underneath the monitor, you can see my notebook.  In there, each Post-It represents a separate book in the series (three green-yellows for the books in Volume One; eight blues for the books in Volume Two; etc.).  Elsewhere in the notebook, I have dozens of scribbled ideas and half-thoughts for the various books and characters in the series.

Now, it's time to start writing.

In the meantime, thanks for reading.
Posted by ety3rd at 11:35 AM No comments:

It's the first week of March, 2020.  I have a soft deadline of 2021 to be finished with Colonies of Kobol and to have them ready to be released into the wild.  (Mainly because summer of 2021 marks ten years since I first released Lords of Kobol.)  Don't put money on that, however.  Lest we forget that I had to take a year-long break from Prelude before I was ready to continue and conclude that one.  (Even though that ended up being the best thing for it and it became my favorite of that series.) 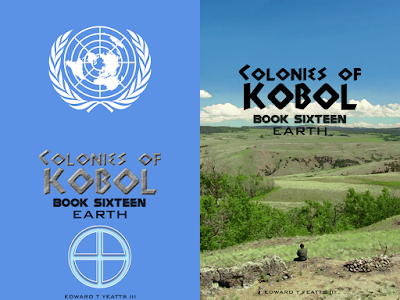 Book Sixteen: Earth is halfway finished.  Now, don't get excited.  Yes, Book Sixteen is the last in the three volumes, but I'm not writing them in order.

In fact, this is the current status of all sixteen books: 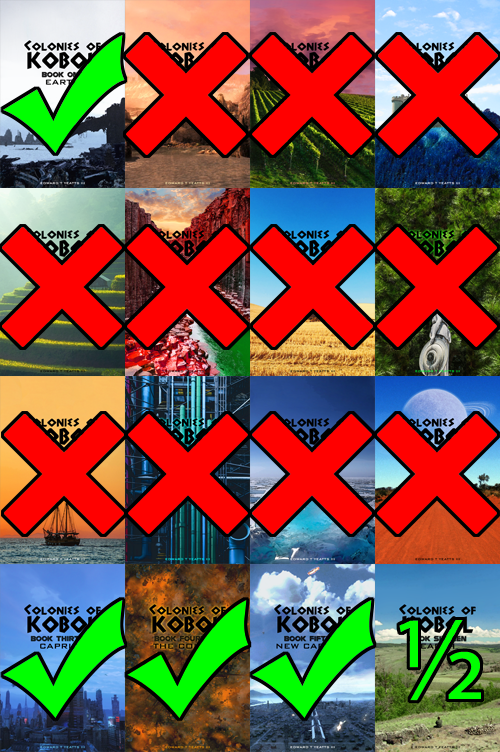 I wrote Book One first because I had just finished a BSG rewatch, so the Final Five were still in my head.  Then I moved on to Book Fourteen: The Colony because that starts with the Final Five arriving in the Colonies and stopping the Cylon War.  After that, I did a Caprica rewatch and started Book Thirteen.

Five-hundred fifty-four pages.  Why is it so long?  I mean, the first three entries of Lords of Kobol are about two hundred and change, each.  Prelude is three hundred and change.  For Colonies of Kobol, Earth (I) and The Colony were about one-fifty or so each.

I have come to the conclusion that Caprica is so long because the show wasn't given the finality it deserved.  For Lords of Kobol, I used about six hundred-seventy pages to tell all the story I wanted.  Plus a bit more with Prelude for a thousand pages total.  That's good enough for the Lords of Kobol, I suppose.

For Earth (I) and The Colony, I'm reusing characters from the show, Battlestar Galactica.  Their stories were told very well and pretty much in full on the series.  There's no real need to explain too much more about their characters.  Largely, it's just about depicting the events that got them where they ended up.  Now, that's not to say there's no character development or insights.  There are plenty.  But given what we saw in the show, these characters weren't necessarily begging for more.

That's not the case with the characters from Caprica.

They only had one year and then we were teased with that amazing epilogue at the end, showing what the future held for them.  And that was all we got.

So, I felt a sense of duty to get these characters to the points we saw in the epilogue and to then push them further toward the Cylon War.  And once the war started, to show what they did during it.

And that's what I did.  I feel like Book Thirteen is the second and third season of Caprica that those characters never got.  The first half of the book is the second season, which takes them from the end of the first season to the places we saw in the epilogue and then further to the start of hostilities with their Cylon companions.  The rest of the book is about the war.  Some characters are added and some drop away.  Some die.  It's long but it needed to be long.

New Caprica?  Not long at all.  Only about sixty pages.  Why?  Because the story of that colony is well known and brief.  I wanted to provide some more context to certain characters, tell a few stories that weren't told on screen (stories that Ronald D. Moore hinted at in interviews), connect dots to stuff we found out later in the series ... but that needn't take up hundreds of pages.

That's the nice thing about using the volume system like I am for Colonies.  If a story about a particular colony isn't terribly long, it doesn't have to be.  If it's begging for a full-on epic, I can do that.  I have germs of stories, skeletons of tales, if you will, for every colony and not all of them will be long.

So, Book Sixteen: Earth (II).  How long is it?  Right now, about fifty pages.  It might get to one hundred and it might not.  The story I want to tell is fairly simple, even though it details the end of the entire "Kobolverse" saga and The One True God's plans for us all.  Yes, there is an addendum, sorta, to the tale of the settlers from the ragtag fleet on our planet some 150,000 years ago.  But the bulk of the action takes place in our own future, some X-years hence.  (I am purposefully keeping the date vague both here and in the book so it's not invalidated by the passage of time in the real world.)  It is in our own future that we will determine if the cycle continues or if it starts again.

(Listen to the words of the Messengers in Times Square for a hint on which way the story will fall.)

In the past, I have given out PDFs of the first drafts to the parts of Colonies that I've finished.  I will not be doing that any longer.  Book Sixteen is the end and I don't want to give away the end.  Also, once I back up to the other books and colonies, I feel like giving away those individual pieces won't do the readers any favors since they'll lack the needed context.  With the parts that I have written to this point, readers knew many of the characters thanks to both shows, BSG and Caprica.  There's no such luck with stories about ancient Gemenon or Sagittaron or Virgon or Aerilon.  I may share chapters from time to time, however.

Speaking of, want a chapter from Book Sixteen: Earth?  Read it after the JUMP.