"The Hobbit: The Desolation of Smaug"

First things first: I held off on watching the Godzilla trailer when it debuted online because I wanted to see it huge on the IMAX screen first.

Boy, that was worth the wait.  It's fantastic.  The use of György Ligeti's Requiem from 2001 was perfect.  I can't wait for my son to see it this weekend.

My wife's deep into Benedict Cumberbatch so she's more happy to see the film than she normally would be.  After I told her I was seeing it at the midnight preview, she sent this text: 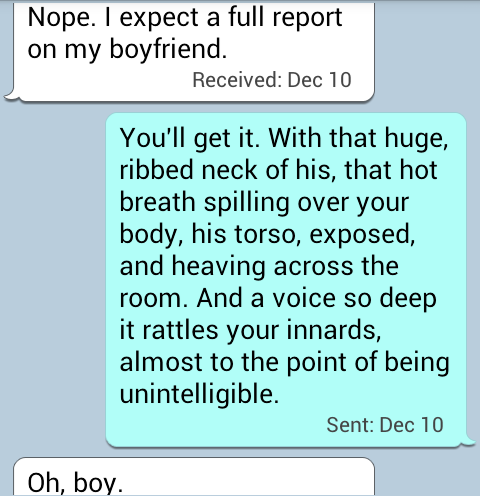 Elsewhere, the Tolkien geeks are up in arms about it.  I saw one call it "The Desecration of Smaug" on Reddit.  Give me a break.

Simply put, it is action-packed, fun and thrilling.  Yes, there are some serious deviations from the source material, particularly in the last third, but people should get over it.

Now, for an in-depth addressing of some of those criticisms, I will do so after the JUMP.