I've started writing Lords of Kobol - Book Five: Of Gods and Titans.  Despite the number in the title, it is a prequel to the trilogy (Books One, Two and Three).

Writing a prequel is not easy.  More often than not, a prequel involves characters and situations the audience is already familiar with, and therefore whatever peril they find themselves in is transitory.  You know they'll get out of the scrape because they have to be an old man in that later movie you're already familiar with.

I still think they get a bad rap.

Technically speaking, my trilogy is a prequel to the TV shows Battlestar Galactica and Caprica.  Thankfully, because it takes place millennia before those shows, my books didn't have to deal with characters everyone knew and loved, and people whose destinies were known.  (There are two characters in my books that appear in the shows, but they don't really count, being outside of time and space and all.)  There was the barest skeleton of events that had to happen (Athena's death, the "Blaze," the Galleon, etc.), but those few details and their couching in a religious context gave me plenty of latitude.

Book Five is different.  It's still a prequel to the TV shows, but it's also a direct prequel to the LoK trilogy.  As such, there will be characters from the earlier books that appear in the new one.  The trick is to make the goings-on interesting enough that you don't care that you already know what happens to Athena or Ares or Zeus.

One way that I'll be helping that along is by minimizing their roles.

Of course, the Olympians play a big role in the story, but they will not be the primary focus.  I will not fall into The Matrix Trap, either.  You know: introduce a bunch of new characters in the sequel who take on disproportionately large roles in the franchise at the expense of the characters you do actually care about.

This seems contradictory, but I'm hoping to walk that tightrope successfully.

In the coming weeks, I'll keep posting blogs like these.  Next week, "The Problem with BSG" or maybe "Retconning."  I'll decide later.
Posted by ety3rd at 3:15 PM 1 comment: 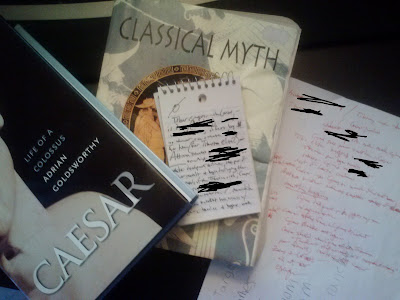 Got my notes and reference books ready ... 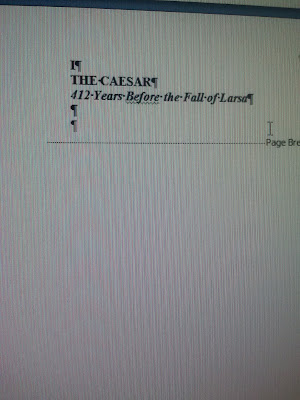 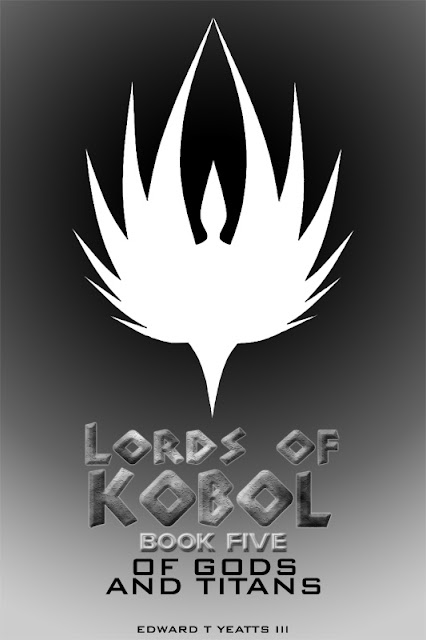 Download the original trilogy HERE and be in the know.
Posted by ety3rd at 8:21 PM No comments:

Given all the hate being flung SimCity 5's way, I thought I'd reminisce about SimCity 4 and present some of the mods I made way back when. 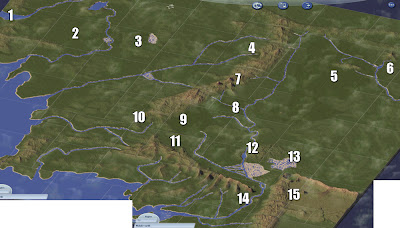 Yes, that's Middle Earth.  I made the biggest possible map, broke it up into appropriate "city" borders and then manually sculpted the topography to match, as close as possible, Middle Earth as presented in Tolkien's works.

(For a stupid-huge version of the top map, click HERE.)

As you can see, I made buildings, too.  Left, the Argonath on either side of the Anduin; center, the Black Gate of Mordor; right, the Golden Hall of Meduseld (difficult to see, but it is laden with horse motifs).  I just dropped them on the map so I could make screencaps for this post.  That's why the ground around them doesn't match up.

Those are the least interesting buildings I made.  I actually built Isengard, complete with the dark tower Orthanc.  It was huge ... gaping pits rent the ground and smoke spewed into the air, surrounded by orcish machinery.  Taller than that, Barad-dûr, complete with an eye atop the tower that bathed the obsidian structure in a hellish orange glow.  The crowning achievement, however, was my Minas Tirith.  Humongous.  Trebuchets, statues, the fountain, the White Tree, the Tower of Ecthelion, all manner of buildings and gates, the Hallows in the rear abutting the White Mountains ... it was all there.

Unfortunately, the PC that housed those greater creations died a few years ago.  If I get some spare cash and time, I might extract the hard drive to see what can be recovered.  Oh well.

As for the big map, here are what the numbers represent:
There are many other details loaded in there, too, like a pool of water by the western gate of Moria where the Watcher lies in wait.

I also loaded in mp3s of the movie soundtracks so that's what I listened to as I played.

My big plan was to mod just about everything.  I'd make low-end houses, mid-range and high-end houses to conform to Hobbit and Middle Earthy appearances, markets, Green Dragon Inns, ditto police stations, schools and so on.  I did make a water wheel that acted as a water pump and a lit-up party tree that served as a power station.  I made a Beacon of Gondor, too (with flames), but I didn't have a purpose for it.

Anyway, time got away from me and I just stopped working on it.