Writing Colonies, Part II: The Final Five and The Colony 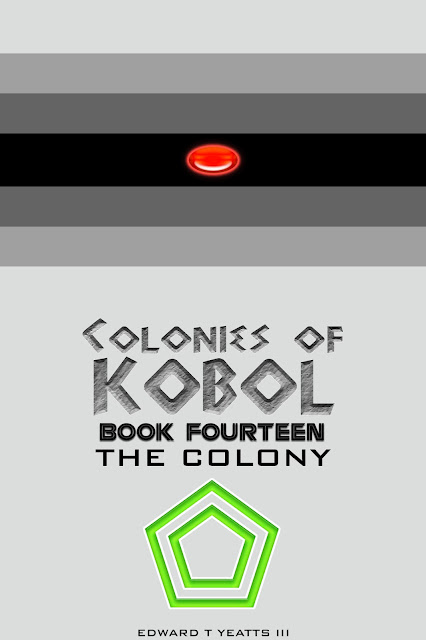 This is the part of the book(s) I'm currently writing.  Why?  Well, I just finished Book One: Earth which featured the Final Five.  In this book, the Five finally reach the Twelve Colonies.  It made sense for me to go ahead and keep writing with the same characters while they were fresh in my head.

As mentioned on the show, this happened in the twelfth year of the First Cylon War and they convinced the Cylons to end the conflict in exchange for the Five giving them resurrection technology.

For a long while, this book was going to be subtitled The Enemy only because I thought Colonies of Kobol - Book Fourteen: The Colony was kinda redundant.  But that would conflict with the naming convention I established with every other book in the series.  So The Colony it is.

Minor spoilers next, though you'll likely forget about it by the time I'm ready to release the damn things.

Book Thirteen is Caprica.  It will pick up after the end of that series and show the revolution that led to the war, as well as the first parts of the war.  Fourteen will have more of the war, then the Five arrive and the book will become more about them helping the Cylons create the "skinjobs."

Before that, though, I wrote some chapters about the Five's journey to the Colonies and a big problem I didn't know I had.  You can read about it after the JUMP:

Writing Colonies, Part I: The Basics and a Bit of Inspiration

Colonies of Kobol is underway and I'm 1/16 finished.

Before I get too deep, I wanted to tell everyone what's up, where my thinking is, etc., when it comes to the story of CoK and how it will be presented. 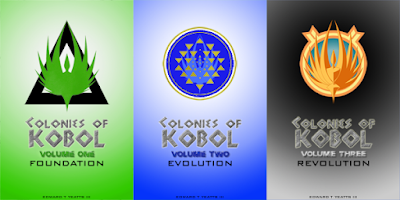 As I've stated before, there will be sixteen separate books contained in three different volumes.  Volume One is about establishing this part of the universe (Cylon Earth and the founding of the Twelve Colonies).  Volume Two is primarily about the Virgon Empire, an unmentioned part of Colonial history that plays a huge, thousand-year role in the Colonies becoming what they are.  Volume Three is about the revolutions that lead to the Cylon War and then the Fall of the Colonies.

Obviously, this trilogy is a sequel to Lords of Kobol and, largely, a prequel to both Battlestar Galactica and Caprica.  Basically, I'm filling in the blanks of the history of the "Kobolverse" or "BSGverse."

Since the books span multiple thousands of years, I needed a common thread.  In Lords of Kobol, it was easy because I had the Olympians themselves.  They were immortal.  But I had a realization a while back ... the primary characters throughout the Kobolverse are the Messengers of The One True God.  Those two "angels" are there on Larsa, through Kobol, on Earth I, in the Colonies, in the Fleet, and on Earth II.  Their mission is the survival of humanity and preservation of life (including Cylons).  They embody the themes of the show and the books.  Making them the central characters was an easy choice.  But despite their centrality, they're also background figures.

Let me diverge for a second and talk about fan fiction.  Yes, my books are fan fiction by definition.  Official channels passed on them, yet I published them anyway.  A common trap in fan fiction is the use of known characters (from a film or TV show), as well as the insertion of the author into the work.  Also, it's common for the fan fiction to get "cute" when it comes to inserting certain characters in unlikely events or introducing someone's grandaddy when it's not necessary.  Throughout Lords of Kobol, I believe I avoided these traps.

In Colonies, as I get closer to the "current" era of the TV shows, I have to involve the characters we already know.  I intend to do so sparingly and with reverence to how they're portrayed on screen.  (The Final Five, for example, are the central figures in Book One: Earth so I didn't have much of a choice in avoiding them.)  There will be no author insertion.  There will be no "cuteness," if I can help it.

There are, however, elements of the story I want to tell that don't fall into the normal frame of the larger tale.  Meaning, there are subplots in the series that don't have to do with the survival of mankind, but I'd still like to talk about them.  Plus, there are certain characters from the show that I'd like to revisit.  I'd like to talk to Baltar or Zarek or any number of others.  I want to get their perspectives on all that happened.

I had an epiphany about that.

Read more after the JUMP.