As most of you know, I am a fan of Mystery Science Theater 3000 and I help annotate riffs for the website AnnotatedMST.com.  I'm also a fan of many of that crew's subsequent projects, including Cinematic Titanic and Rifftrax. 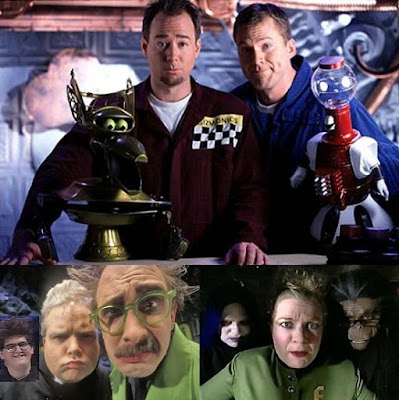 Recently, Rifftrax riffed their 200th film and that got me to thinking: how much time have the people involved spent working on talking over (mostly) bad movies?

So I did the math.

(Apologies to the other writers, including Paul Chaplin, Bridget Nelson, Conor Lastowka, and Sean Thomason.  I know they've busted their butts, but it was hard enough focusing just on the people on screen.)

A caveat upfront.  Primarily, I went with some rather general times for the various shows.  Since we're talking hundreds of films, there's no way I'm going to look up the length of each movie and catalog it.  I'm not THAT obsessive.

Another thing: I'm looking at this two different ways.  First, I'll look at how much time they spend "on screen" talking at their subjects.  Then I'll examine how many hours of riffing they worked on.  Here's what I mean by that, by way of example: even though Mike didn't start hosting MST3K until episode 513, he worked as a writer since the first episode of season one.  So the first calculation will be Mike's time starting with 513 and the second will start with episode 101.

Mystery Science Theater 3000: 197 episodes, 1 feature film, 4 thirty minute specials.  Since I'm only concerned about the time spent riffing on the movies, I went with a time of 75 minutes for each episode and the film.  (Each show was two hours long, minus about thirty-five minutes of commercials and ten-to-fifteen minutes of host segments, intros, etc.)  The four half-hour specials I added up to be equal to one episode.  (I did not include the KTMA pilot, The Green Slime, because I am unsure of its actual length and the fact that no real riffing at all occurs during the theater sequences.)  I know there were a few other things the guys did, like riffing on a PlayStation promo and for a sports show ... I didn't include those times primarily because I forgot about them until just now, which is after I made the charts.  At most, we're talking about an additional half-hour for a few of the people.

Film Crew: a brief foray into riffing before Rifftrax, there were 4 episodes.  I decided to use 90 minutes for each as the figure.

America's Funniest Home Videos: Huh?  Yes.  Both Trace Beaulieu and Josh Weinstein wrote for the show for a few years, and what else is AFHV but riffing on amateur films?  Obviously, since neither Trace nor Josh were on screen for the show, those figures won't come into play until the second section.  I went with 15 minutes for each episode (since there's five-plus minutes of each with the host and the audience and subtracting commercials).

Cinematic Titanic: 14 different shows were written and performed, though only 11 were released to video.  (Come on!  I have to have the other three!)  I count all fourteen and consider each to be 90 minutes.

Rifftrax: Holy crap.  OK, there are 130 downloadable commentaries; 31 of the so-called "Rifftrax Presents" commentaries (meaning they're Mike-less); 97 downloadable video-on-demand films with riffs (I did my best to subtract the ones that were previously released as downloadable commentaries); 16 live shows; 5 episodes of Total Riff Off (TV specials aired on NatGeo Wild).  For the many, many films, I went with an estimate of 105 minutes ... an hour forty-five seems about right to balance out the shorter films versus the many two-hour blockbusters and the occasional three-hour epics they've done.  Also, I'll add in Total Riff Off as being 45 minutes each, plus there are a few other TV shows they've done and I'll fudge the numbers to 45 minutes on them as well.  (Another note: there are several films that were done multiple times.  For example, Night of the Living Dead.  It was released first with a Mike commentary, then a commentary was released with Mike, Kevin & Bill, then it was performed as a live show.  All three had different content, so I'm counting NotLD as three separate entries.)

Rifftrax Shorts: Seems worthy of being separate to me.  248 shorts.  Wow.  I'm going with 15 minutes each as the estimate here.

(Again, this accounts only for the voices heard during riffing and not behind-the-scenes effort.) Yes, both TV's Frank and Pearl Forrester got a little bit of riffing time in during a couple of episodes of MST3K.  And, yes, Mary Jo Pehl has done a few Rifftrax, too.

A few other tidbits: during MST3K's so-called "Season Zero" on KTMA, there were three episodes in which Trace did not appear; one without Josh; one without Joel (leaving Crow and Servo to riff on the movie alone!); and another where Servo left in the middle of the movie to "bake muffins."

TOTALS (from highest to lowest):

"ON AND OFF SCREEN" RIFFING

(Again, this accounts for the writers as well as performers.  Despite occasional absences during KTMA episodes, IMDB credits everyone so they all get credit from me.) 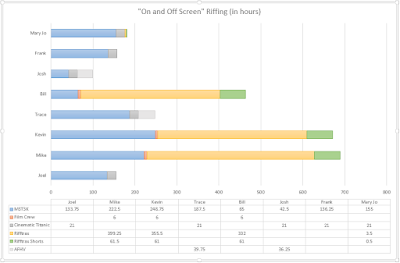 Other than incorporating America's Funniest Home Videos, the only real changes here are to the MST3K totals.

As I said before, Mike was a writer almost from the show's inception.  Even though TV's Frank wasn't in the theater (except for briefly in Last of the Wild Horses), he was a writer for five whole seasons.  Mary Jo helped write for many episodes before she ever showed up as Pearl.  And Bill even co-wrote a few episodes in season six; years before the jump to SciFi Channel.

I know the process of writing riffs for movies takes far longer than just the hour and change it takes to watch the finished result.  There's no way I could calculate how long they actually spent slaving over Manos or The Room.  The final product will have to suffice for these calculations.

TOTALS (from highest to lowest):

Why did I do this?  Hell if I know.  Maybe Torgo, Ortega, Norman and Gregory the Skunk teamed up to threaten me ... nah.

Seriously, though, I saw a post by Kevin Murphy reflecting on his time spent riffing things over these last 27 years, particularly since Rifftrax just did their 200th unique film.  It got me to thinking: just how much enjoyment have these people given me?  And, if I use charts and math, can I somehow sap said enjoyment from that effort?  I think the results speak for themselves.