Update on "Colonies," plus FLAGS

I know it's been a while and I apologize for that.  If you follow me on Facebook or Twitter, you'll see that I've been writing for most of the last year.

Someone around here (me) may have stated a while ago that Colonies of Kobol would be released in 2019 to coincide with the tenth anniversary of the show's ending.  Well, needless to say, that was a damn dirty lie.  To paraphrase Dr. Malcolm, "Life, uh, got in the way."

Writing continues apace on the Caprica portion of the series (with Earth I and The Colony largely finished), but that still leaves about thirteen sections untouched.  Perhaps I should use the tenth anniversary of the publication of Lords of Kobol as my new goal, which would be summer of 2021.  That's a nice target, but I won't be planting any more flags on the calendar because I don't want to disappoint you guys again.

As I'm writing about the pre-federal days of the Colonies (meaning, before they united against the Cylons), I've been using the cool little book Beyond Caprica: A Visitor's Pocket Guide to the Twelve Colonies.  Written by Bob Harris, this book (and the QMX map) was also worked on by people behind the scenes of Caprica as they fleshed out the worlds of the Colonies for the show.  It's considered "quasi-canon," which basically means that any detail in it could be contradicted by something in the show if they thought of something better for a storyline.

Regardless, we're all aware of the federal-style flags for each of the Twelve Colonies: 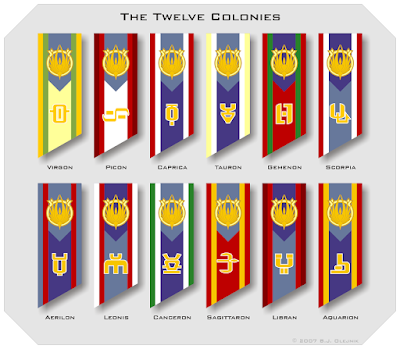 These are the banners seen hanging behind Adama or Roslin at a big event or funeral, etc.  Naturally, one would assume that each individual colony had their own flags before the Cylon revolt.  Beyond Caprica helps illuminate this.

Well, not for Caprica.  No specific symbols or flags are mentioned in the book, BUT, in the show Caprica, we can see a banner-like flag on the stage behind Agent Duram in the pilot episode and it looks exactly like the federal-version of the Caprican flag seen above, but without the federal "eagle/phoenix" emblem that we've come to recognize as the Colonial seal.  This leads me to believe that -- since Caprica was the seat of federal power for the Colonies -- they must have designed the flags for the other worlds, too (given their similar style).

Just for kicks, I made a rectangular version of the Caprican flag:

Beyond Caprica states that "the informal symbol is the numeral 'two.'"  OK, sure.  To make it into a flag, I chose a similar style and colors used in some eastern European nations, since Gemenese cities, names, and language are modeled on Romanian, largely. 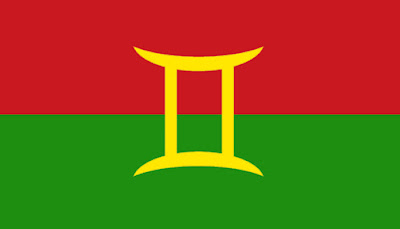 I think you'll be able to sense a pattern, because the book reads, "You probably know Tauron by its symbol, the bull."  The zodiac plays a big role, unsurprisingly.  For the flag, I went with a color to match the all-important soil of Tauron, and I made the bull large and aggressive.  (It was hard to find one that didn't look like a sports logo or a malt liquor mascot.) 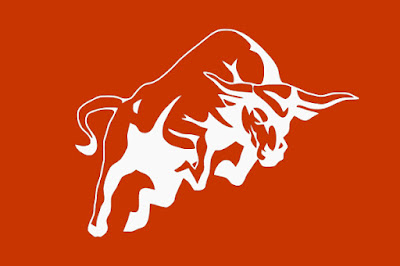 "The informal Pican symbol is two stylized fish circling each other."  I wanted to evoke the simplicity of the Japanese flag (with maybe a little of the South Korean flag, too).

If you don't know, Virgon is known as "The Blue Colony," because the plant life contains oils that evaporate and cast a blue tinge everywhere.  The book states that the Virgan symbol is "simply the pale electric blue known as 'Virgan blue.'"  Perhaps they had a more complex flag during their imperial days, but for just prior to the Cylon War, we're just going with a blue flag (and I like the longer dimensions for it, too).

Here the book gets specific: "The Leonan symbol is the Leonis royal crest: a lion in profile wearing an ermine-and-silk cape, set on a golden shield, surrounded by royal purple.  The shield is topped with a large nine-pointed mural crown."  Unfortunately, I couldn't draw an ermine cape to save my life, so I just left it off. 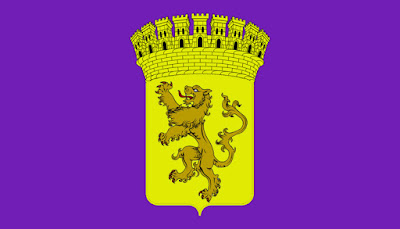 "The informal Sagittarian symbol is a simple outline of a drawn bow, its arrow poised to spring forward."  Since Sagittaron is also the most exploited of the Colonies, I went with an African color scheme for its flag. 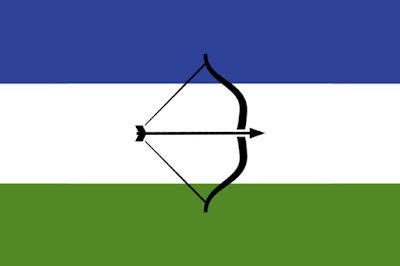 Also, in searching for clip art for a drawn bow, I came across a great, evocative image that made me think this could be the flag for Tom Zarek's "SFM."  (Sagittaran Freedom Movement?  The show never said.) 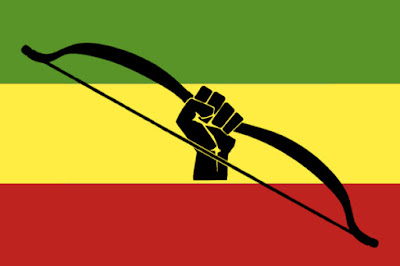 Beyond Caprica made this one easy for me: "The symbol of Scorpia is a red scorpion curled to strike, on a black-white-black tricolor."  Done and done. 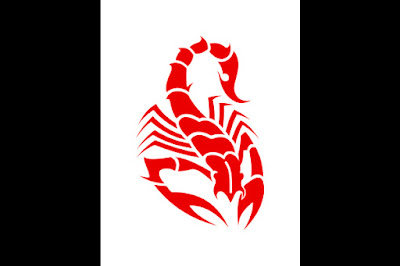 "A set of scales set in a pale blue circle on a deep blue field." 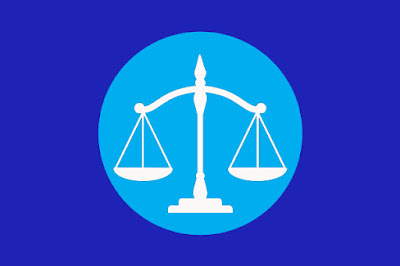 "A silver crab on a red field." 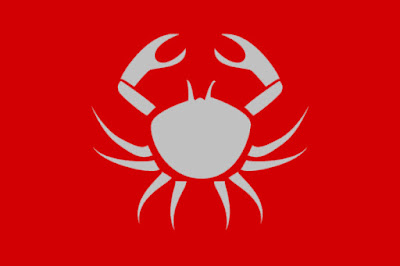 "A blood-red pair of ram's horns on a white field, between a pair of red horizontal stripes." 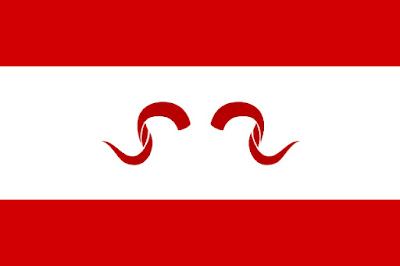 This is another flag that was explicitly described in the book.  (Even down to the "asterisk" and the "star" in the corners.  I'm not sure I get it, but there you go.) 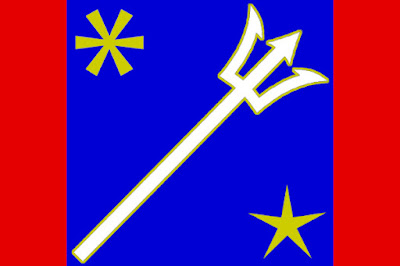 No more dilly-dallying.  Back to writing for me.
Posted by ety3rd at 4:03 PM 3 comments: