Seven Years of "Lords of Kobol"

Thank you for downloading and reading the book!  I really, really appreciate it and hope you have enjoyed it.  Please, do me a favor and rate & review the novels online wherever you got them (or, for that matter, wherever you can).  That will really help me.

To celebrate, I thought I would make available the trailer I put together in the months before the books were published seven years ago.  The editing isn't great and some of the lines were ham-fistedly shoved into the video, but ... what can I do?  This is what I made and uploaded to YouTube before they quickly killed it for the music and TV clips.  BUT, you can download it now and watch what I'm sure would have made Lords of Kobol an even bigger success: http://bit.ly/KobolTrailer

Thanks again!
Posted by ety3rd at 9:02 PM No comments:

Get part of "COLONIES OF KOBOL" right now!

Today, August 3, marks the seventh anniversary of Lords of Kobol - Book One: Apotheosis.  I just want to say "thank you" to everyone who downloaded it and gave it a read.  Big thanks to those of you who rated and reviewed it wherever you got it.  (It's not too late; go ahead and rate & review the series online wherever you can.)

To say thanks, I'm offering up the two (mostly) completed parts of my upcoming Colonies of Kobol series: Book One: Earth and Book Fourteen: The Colony.  Since these two have a common theme, a special cover seemed to be a logical thing to do: 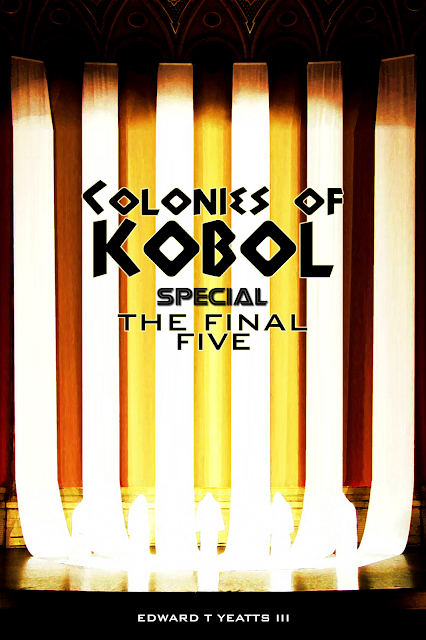 Yes, these two books involve the fall of Cylon Earth and the trek of the Final Five from there to the Colonies, where they put a stop to the First Cylon War.  Then we get to see the creation of the Colonial skinjobs and the rise of Cavil.

Both are early drafts, so be forgiving.

A good knowledge of Battlestar Galactica is (obviously) recommended, as is at least a passing familiarity with Lords of Kobol.  Also, knowing a bit about Caprica would be helpful in places, too.

To get your copy, click this link: http://bit.ly/Final5special.  You have only 24 hours to do this!  Once we hit Saturday, August 4, your time is up!

Each person will get a PDF.  Please don't share it.  Thanks again! 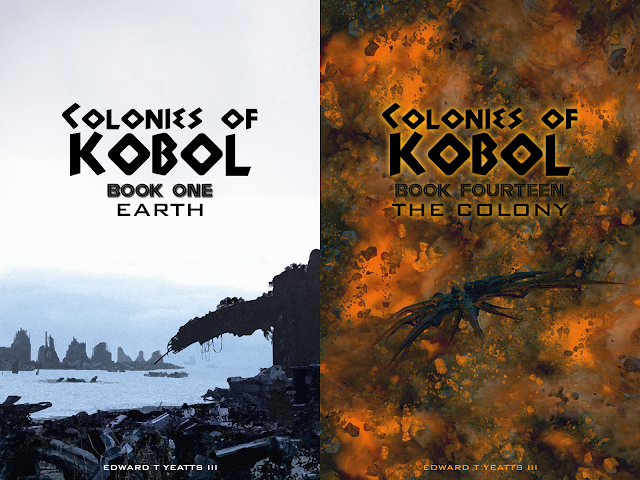