As most of you know, I recently finished writing my next book, Diary of a Second Life.  I'm in the editing phase now, but instead of just editing, I'm also illustrating certain things.  If I come across something I think that our protagonist might want to illustrate in his diary, I draw it.

Here's a preview of some of the bits of "art" I've finished and can share without being spoilery.

First up, a map.  You'll recall from Lords of Kobol and Displaced that I love mapping things out (click to enlarge): 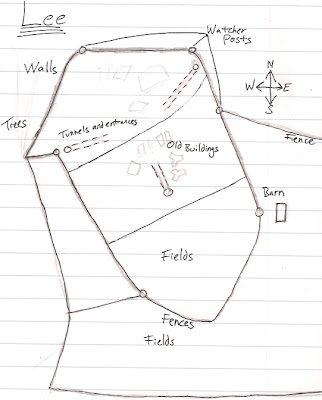 Next, here's our hero's weapon of choice.  He calls it his "curved blade." 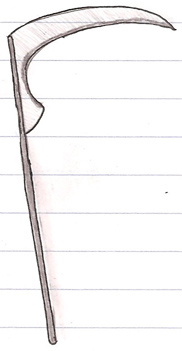 Here are the lockers.  The concept is creepy as hell, but I won't get into that here: 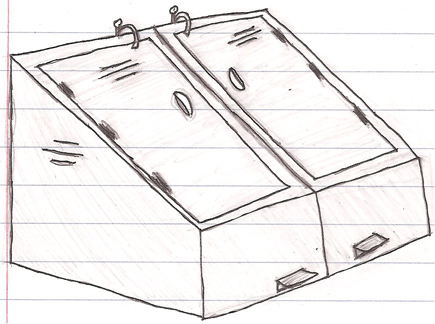 Finally, the ruins of an ancient bridge (click to enlarge): 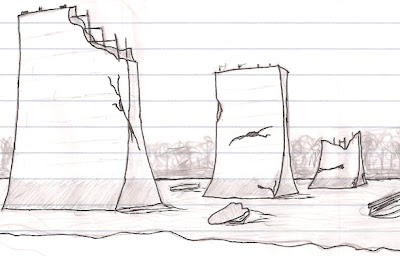 I later decided to change the location of this river, and because I'm a nerdy stickler, I needed to redo the drawing to accurately match the bridge supports at the new location.  Yes; this bridge, unwrecked, exists (click to enlarge): 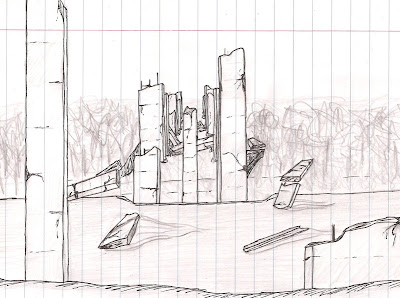 More to come later, of course.  Still aiming for a mid-March release.
Posted by ety3rd at 4:33 PM No comments:

I know it's been a while since I posted anything.  I banked a couple of those "Killing Time" articles a while back so I could bridge the gaps ... I ran out.

Good news is that I'm almost done with my current book.  I'll be finished writing before the weekend and then I'll start editing and rewriting, as needed.  Oh, and drawing.  I need to draw a few things.  It's a diary and the writer draws an occasional picture.  Because I suck at drawing, that means the character who's writing/drawing will suck at it, too.  Authenticity, baby.  Not every illustration should look professional.

Regardless, I'm still on track for a mid-March publication.  As I move forward, I'll post a few more previews.  Maybe another disturbing chapter, maybe a piece of my crappy art.  We'll see.
Posted by ety3rd at 1:05 PM No comments:

I've been a fan of Mystery Science Theater 3000 since the mid-'90s ... and we didn't even have Comedy Central on our cable.

My dad was a television repairman.  Doesn't get much work now, as you can imagine.  He traveled to some workshop in a different area that had a different cable system and while he was working on a set, he saw "a show with a guy and some robot puppets watching Amazing Colossal Man."  The riff on the giant syringe (by Tom Servo, I believe: "Where's the giant cottonball?") hooked him.

It was a couple of years before I managed to see an episode myself.  Staying at an aunt's house, I got to see Last of the Wild Horses.  The movie bits were OK, but it was the "Mirror, Mirror" host segments that really ensnared me.  I mean, Mike Nelson as evil Mike, Crow T. Robot singing the Star Trek fight song ("Die-die-DIE, die-die-die-diedie!"), Dr. Forrester & TV's Frank in the theater, Gypsy as Uhura, the flipping Satellite of Love ... good stuff. 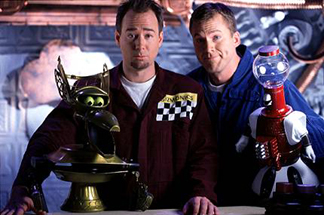 Fast forward a bit and I discovered some really cool sites with info about the show, the movies they watched and more.  Satellite News is a great site for news about the show and what all of the Best Brains are doing these days and Annotated MST is a fun site to use to follow along as you're watching the show in case you hear a riff that gives you the Linda Ronstadt treatment.**

Problem is, Annotated MST doesn't have most of the episodes done.  So, I decided to pitch in.

About a year ago, I started with the KTMA episodes (Season Zero).  I just finished Season One, too.  I'll be starting in on Season two soon.  You can see all of the episodes done here (some of the ones I've finished haven't yet been encoded and uploaded by the webmaster; takes a while, as you can imagine).

How does it work?  Well, I watch an episode of MST3K and have a Wordpad window open.  I type everything they say while they're in the theater.  It takes about an hour to transcribe twenty minutes worth of riffing.  (That's about four hours of transcribing per ep.)  As I type, if I spot something with a reference (meaning, a pop cultural, historical, scientific, etc. -- anything that may need explaining), I put an asterisk under that riff.

Once I'm done transcribing, it's time to annotate.  I go to all of the asterisked riffs and explain what's up.  My only real rule is that I don't try to explain the joke.  This takes a bit longer ... maybe six hours per episode.  Yes, I do this on days when I'm not really planning to write.

Here are a few examples from Episode 105, The Corpse Vanishes:

Why does the Earth have a shadow? –Why are there clouds in space? –Why are we watching this? –Daddy, what’s Vietnam?
Ah, the 1980s. Without the Internet, people had to buy overpriced libraries of books from the Time-Life Company cataloging stretches of history. This line, specifically, refers to a commercial for their History of the Vietnam War series. In the ad, a father and son are at the Vietnam Memorial in Washington, D.C., and the son asks, “Daddy, what’s Vietnam?” Buy the books and find out.
...
Can’t believe those thugs are taking orders from a guy dressed in spandex. –Yeah.
Spandex (also known as Lycra or elastane) was developed by DuPont’s Joseph Shivers in 1959. The name originates with the fiber’s elasticity: “Spandex” is an anagram of “expands.”
...
Meanwhile, hundreds of miles away.
Variations of this phrase originated with cards inserted in silent films of the early twentieth century. In westerns, this was often “Meanwhile, back at the ranch ...” Once audio became a common component, the phrase was still used by narrators for films, radio, and television shows. Most recently, it was used in the various Superfriends animated series of the late 1970s. Narrator Ted Knight or Bill Woodson would say, “Meanwhile, back at the Hall of Justice ...” or “Meanwhile, at the Legion of Doom ...”
...
We gotta go. Carry me back to the ol’ Satellite, Joel. –Carry me, too. –No. –You’ve got legs.
“Carry Me Back to Old Virginny” was written by African-American minstrel James Bland in 1878 and is about a former slave who struggles in the post-Civil War economy. It was Virginia’s state song until 1997, when it was retired because the lyrics were deemed offensive (well, they do include the word “darkie,” after all).

And here's a bit of trivia: what film, book or TV show is the single most referenced on MST3K?  Highlight below to find out:

"Why in the name of Zeus would you want to do this?"

There you go.  If you want to watch old eps of MST3K and you miss some of the references, go to Annotated MST.  It'll help.