In my post-writing phase, I intend to put up entries on all manner of topics related to (and maybe not) BSG, Lords of Kobol, etc.  Here's the first.

Language.  When you're writing a book, language is pretty damned important.  It casts a tone over everything.  Word choice, dialogue choice, dialogue styles, ... it makes the world you're creating feel familiar or alien.  Whichever one you need.

For Lords of Kobol, I've tried to walk the line between familiar and alien.  Since the stories take place thousands of years before BSG, I have a wide degree of latitude when it comes to the world I've made and how the characters speak.  It needs to be familiar enough so that the reader is comfortable with it, but I want to inject things that make it feel foreign.

For example, in all of the books, I've managed to avoid having any character say, "OK."  That's actually harder than you might think.  If I had to guess, I'd say that some of the characters on the show said "OK" on occasion, but not in my books.  "OK" dates to the early 1800s when there was an "abbreviation fad" (holy crap, life must've been boring then).  There also appeared to be a "misspelling fad," because "OK" came to mean "oll korrect."  Apparently, "okeh" is a Choctaw word meaning "it is" and that came to be known at about the same time, so perhaps the two origins are intertwined.  Regardless ... I felt "OK" was too colloquial and decided not to use it.

Another one?  The word "luck" doesn't appear in the books.  Characters might say "good fortune," but they'll never say "good luck."  Why?  I don't know.  It's just another way for it to feel alien.

One of the biggest traps for writers, particularly those who dabble in scifi or ancient times, is the use of idioms.  You know what an idiom is, right?  It's a phrase that doesn't mean anything logically on its face, but we understand what's being said.  For example, "fine kettle of fish."

Because this is set on another planet thousands of years ago, in Book Five, I use a variety of idiomatic substitutions.  Here are a few:
See?  Even if I didn't warn you about the new idioms, you probably would have figured them out easily enough.

Another means: tone of dialogue.  Think about historical films.  Let's choose a Roman epic, since that fits with Book Five.  Everyone has a British accent because, apparently, everyone spoke with British accents back in the day.  The rich patricians and the emperor will speak with a highly educated accent.  They'll enunciate all of their words.  They won't say certain things.  This conveys high class.  The plebeians, the soldiers and other rabble will speak with a Cockney accent.  Something to convey low class.  That's the way these things work.

In Book Five, I do much the same thing.  The Caesar and his associates often speak in bigger words with a slightly more archaic tone.  The plebians in the story do not and they often employ contractions.  Zeus and his people speak like "we" do (modern Americans), with lots of contractions and an easy familiarity.  That's because this is the way they spoke in the previous books and also because we're supposed to be paying attention to them more intently anyway.  Lastly, the Messengers (BSG's angels) speak in a more "ethereal" manner.  Their word choices and tones are nearly biblical or Tolkienesque (just like all of Book Four).  This puts them at a distance from us; it makes them feel ancient, alien and out of reach.  (The narrative around the "tenders" also tends toward the Tolkieneque to aid with this feeling.)

That's all I've got for now.  Back to the reading and editing.  More posts to come in the near future.

As I settle down for the reading/editing process, I thought maybe one or two of you might be intrigued to see where the "magic" happens (click to enlarge): 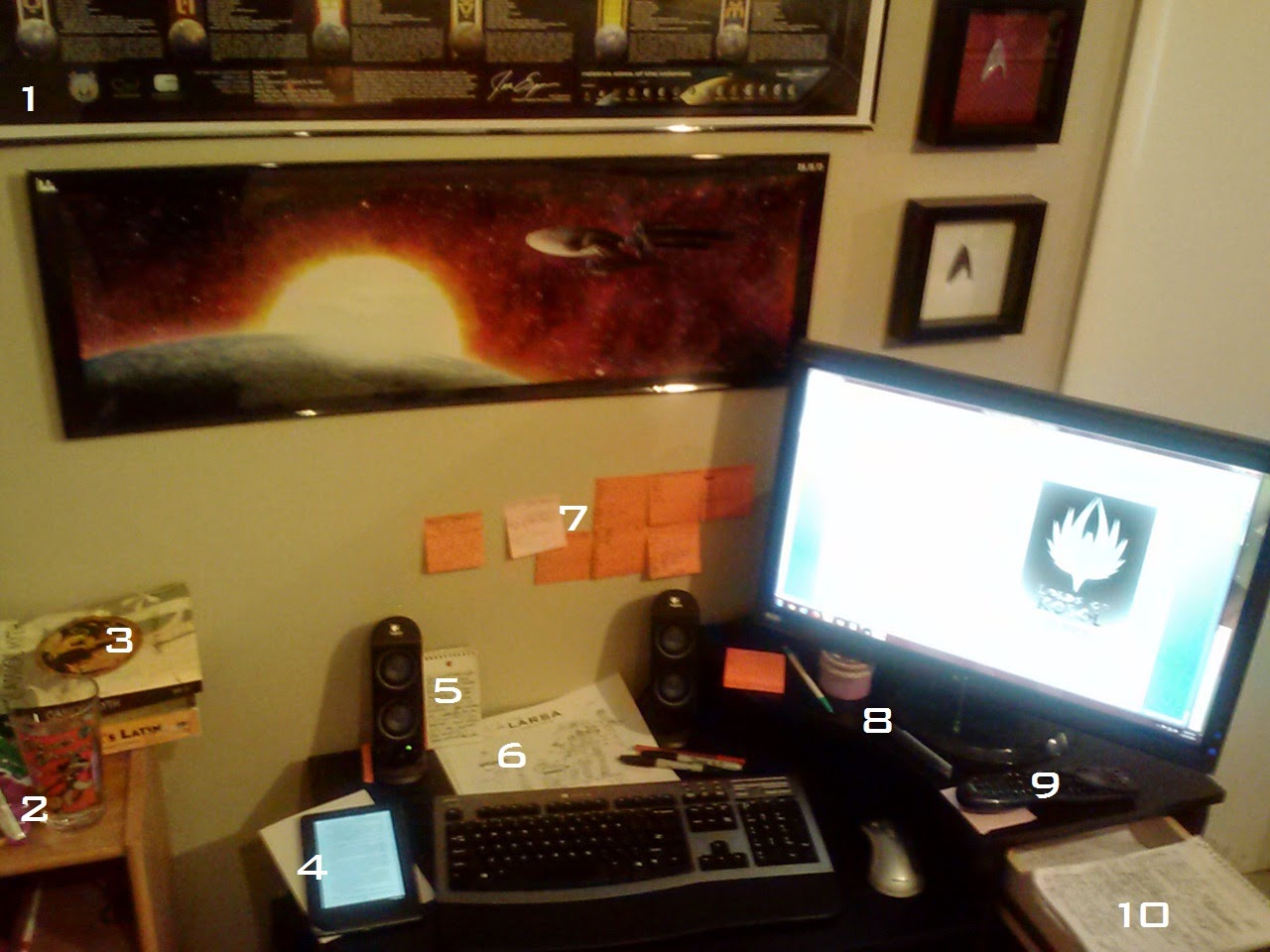 Enough stalling.  Back to work for me.

Now for weeks of re-reading and editing.

Once I finish the first draft, I'll begin the re-reading and the editing phase of everything.  Once I'm in that swing, I'll be in a better headspace to post on a regular basis.

And I have plenty of things lined up before Book Five's release.
Posted by ety3rd at 5:14 PM No comments: