You know me.  I love making making maps.

This time around, I felt it necessary to provide a depiction of the fleet's journey to Earth II (aka "New Earth," "our Earth"). 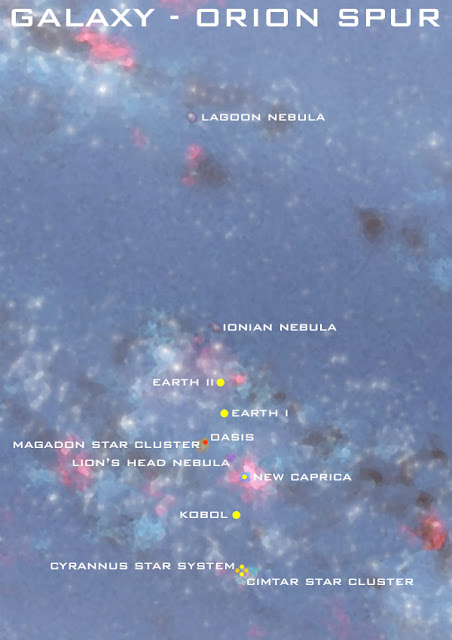 There are three astronomical tidbits we know to be true, by virtue of science and of the show.

These things make it pretty easy to arrange stuff along a line-of-sight that stretches through Earth II and the Lagoon Nebula.  Thanks to the similar appearance of constellations Gaeta verifies in orbit of Earth I, we know that Earth I is in the same line with Earth II and, basically, in the same "neighborhood."

In the show, it is said that the Ionian Nebula is 13,000 light-years away from the algae planet (what I've called Oasis).  Since that figure is way, way beyond any other distance in the show (and would actually put it near the galactic center), I'm forced to say they misspoke and that it should actually be 1,300 light-years.  I also put it beyond Earth I and Earth II, because of the distance and because "WE'RE GOING THE WRONG WAY."  It's fairly obvious that the fleet was lost for several episodes after Starbuck's return and the signal from her Viper on Earth I led them back in the right direction.

Given the stops the fleet makes along the way post-New Caprica, that's where I placed the Lion's Head Nebula and the Magadon Star Cluster (with Oasis).  Slightly off the line-of-sight with Lagoon, but close enough to make sense.

Does it seem small?  It shouldn't.  That's nearly three thousand light-years.  That's a ridiculously vast amount of space.  Plus, there's a fact about our galaxy that can't be adequately conveyed in this map: space is three dimensional.  More than that, our galaxy is about 1,000 light-years thick, so that makes the volume of space to be explored for Earth (I & II) even more mind-boggingly huge.

Here's another map to give you some perspective on how big a percentage of the galaxy the fleet traversed: 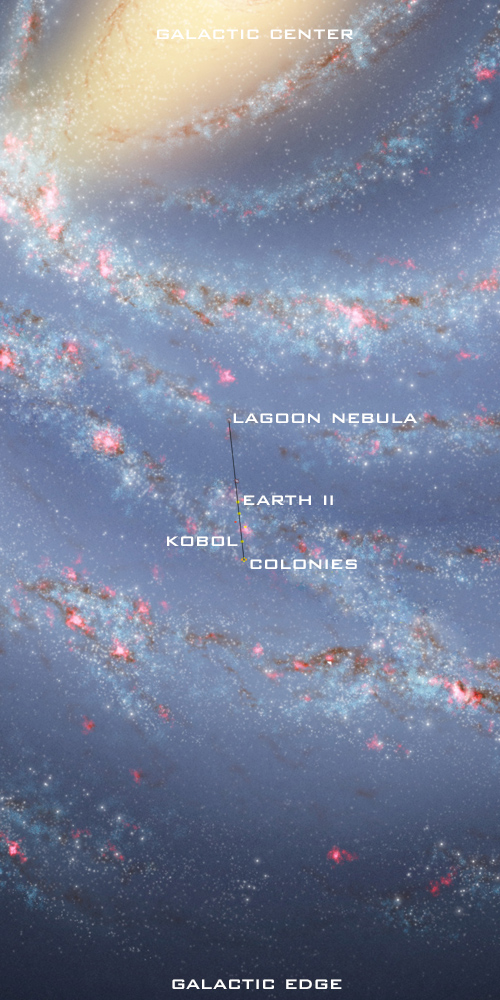