I've worried that perhaps Book Five turned out to be longer than I anticipated.  After all, my previous Tolstoyian work was Book Three, which maxed out at 123,000 words and 260 pages in Word.  Book Five is a relative Titan (ha) at 150,000 words and 300 pages. 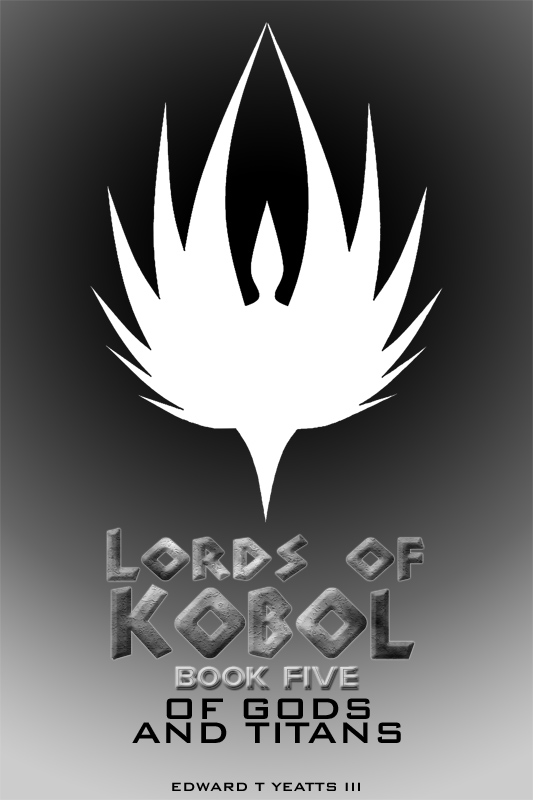 I was worried about scaring people off with its size, but then I realized that my work is something akin to a dog whistle at this point.  The people who hear it will come.  I'm playing to my audience and they like what I've done so far.  (I'm very appreciative if not somewhat bewildered by the enthusiasm.)

As I wrote, I trimmed.  There were whole chapters cast aside that dove deeper into Larsa's history, particularly the history of the Tiberian Empire and the history of the predominant monotheistic faith.  Some of that info found its way, in tidbit form, into other chapters.

I gave serious thought last week to completely restructuring the first half so we can get to the creation of the Titans that much more quickly.  I went through it all and highlighted what had to go and what had to stay.  I determined that I'd only be able to net about four fewer pages.  Those pages included a lot of good character work, particularly for the Caesar, and some good world-building scenery.  I decided four pages just wasn't worth it.

So, you'll be getting Book Five as I intended it.  It's large, but I think you can handle it.

When it comes to writing Lords of Kobol, some of my favorite stuff comes from mythology.  I'm talking about the Greek mythology; not the show's mythology.  I love reading up on these ancient tales and then trying to figure out a way for Cylons to enter the mix.

So it's fun.  It's a good storytelling exercise.  Like making Hades the lord of the underworld.  Or punishing Prometheus for revealing forbidden knowledge to mankind.  Sometimes I like to take the mythology and turn it completely around.  Honestly, the only example of that I can think of would be Hephaestus' loving marriage to Aphrodite.  (In mythology, their marriage was rather loveless and she slept with everyone but Heph.)

With Of Gods and Titans, there were many, many more myths to explore.  This gave me a skeleton of narrative ideas and also fertile ground for creative integration solutions.

Sorry.  I seemed to have gone corporate for a second there.

Basically, there are shloads of good myths about the gods and the Titans and that gave me shloads of opportunities to make cool stuff up.

For most people, they might not notice the connections to real myths.  If you're a Greek scholar or a fan of this stuff, you might even get more enjoyment from it all.  But for the masses, there's really only one Titan story we all remember: 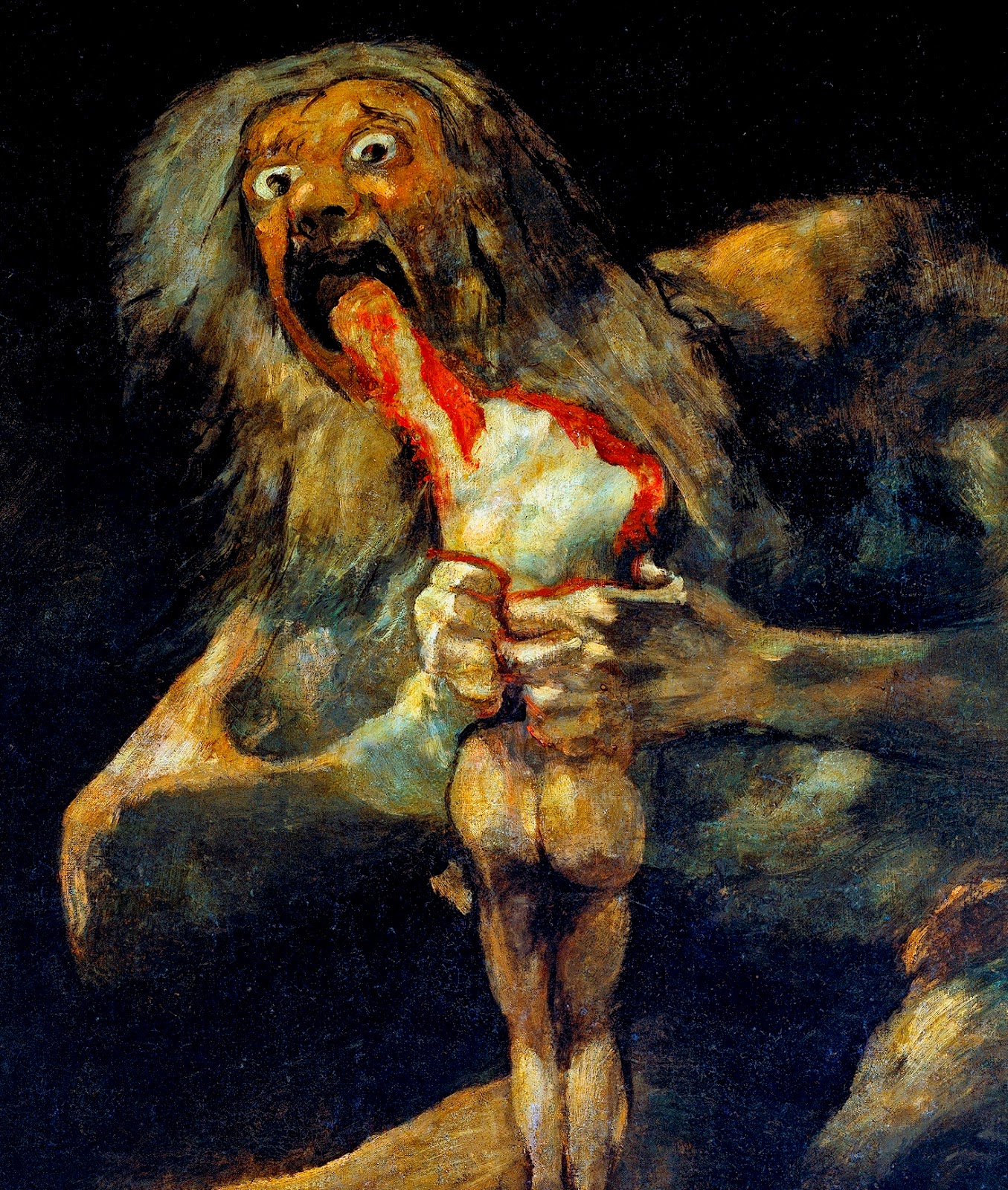 Admittedly, it's pretty damned hard to forget that Cronus (Saturn) ate his kids.  Maybe you forgot that Rhea (Cronus' wife) hid baby Zeus and tricked Cronus into eating a stone instead, which later caused him to puke up his other children.  Still, that's the part about the Titans everyone knows.

I won't spoil it, but I will say that I'm particularly proud of how I made this story fit into the Lords of Kobol universe.

But there's a lot more myths to be had.

The war between the Olympians and the Titans is called, in Greek, "Titanomachy."  "-machy" is a suffix meaning "war" or "conflict."  Again, I won't spoil anything, but there are other "machies" involving the Titans and the Olympians.  They are the "Gigantomachy" and the "Typhonomachy."  If you want, feel free to Google or Wiki those, but maybe you'd like it better if you studied up on that biz after you read Book Five.

Still, for my purposes, it's intriguing to think that most people only know the story of Cronus eating his children.  But how did Zeus overthrow the Titans?  It's in the book.

I know I said this is a post about myth, but I won't be getting into the mythology of BSG here, or the whole One True God and its Messengers thing.  I'll save that for a later post about the theology of Book Five.

You have already read them, right?

Did I just copy & paste those flashbacks into the new book?  Did I radically change things around?  Did I totally rewrite all of Zeus' back history, meaning I'll need to do another rewrite on the trilogy?

Minor spoilers and answers after the JUMP.

This will be a short one.  I thought you might like to see the final maps that appear in Book Five. 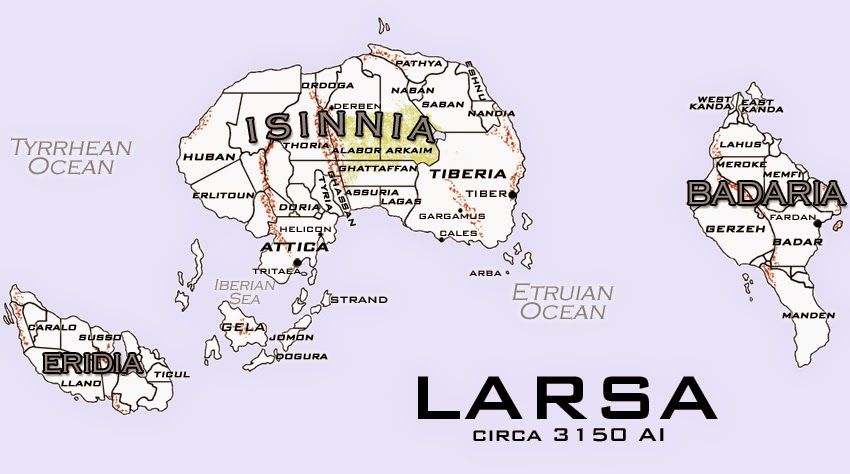 As I stated in an earlier post, since Larsa is very Tiberia-focused, the map moves them to the center.  Also, much of the world recognizes Tiberia's names for geographical points of interest (Isinnia, Eridia, Badaria, etc.) instead of the more ancient Attican names that Zeus, et al, employed in the trilogy (Galatia, Scythia, Illyria, etc.).

Like previous maps I've made, the place names come from actual geographic features I found on an ancient Latin map of the Roman Empire as well as variations of ancient cities and lands from all around the world.  In the trilogy, I stuck to ancient Greece since Zeus, etc., named everything after Attican sites.  This time around, without a unifying influence, it seemed logical to name things based on all kinds of differing backgrounds and histories. 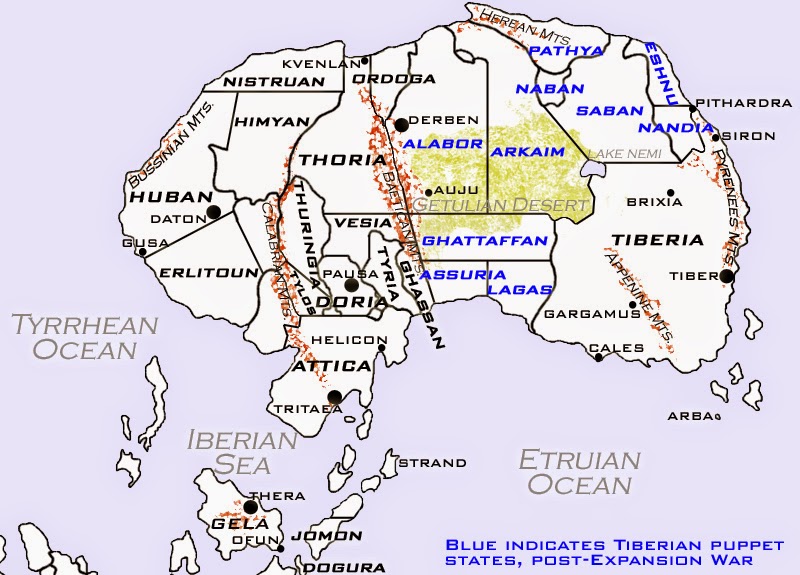 Since much of the action takes place in Isinnia, I knew I'd need a more detailed version so I could squeeze in more names and labels.

That's all for now.  More reading and editing to do.  More blog posts coming soon, too.

I've typed on this subject before, but as I'm nearer the book's release, it seemed fitting to tackle it again.

There's an inherent problem with prequels.  If characters carry over from the original to the prequel, then we already know how they turn out.  So we have to make things interesting.  We have to do stuff with them that defies (some measure of) expectations. 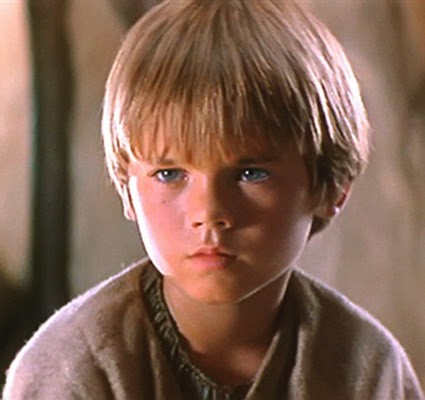 Trust me, I didn't go so far as this.

Zeus and crew feature prominently in Book Five, of course.  But the Zeus we see is not the same Zeus we find in the trilogy.  There is a learning curve for him.  We get hints of the god who will rule Kobol, but he doesn't fully come into his own within these pages.

The same can be said for other characters that appear in the trilogy, but I won't go into further detail for fear of ruining any potential surprises.

Another problem?  Characters you don't know about and aren't familiar with at all.  Sometimes this isn't a problem and sometimes it is.

Like this guy.  Who cared about him in the Matrix sequels?  No one.  That's who.

By necessity, there are new characters in Book Five.  The subtitle alone tells you that the Titans are involved.  Also, as depicted in a Book Three flashback, we know that there's a Caesar, too.  I found Caesar to be a compelling character and I didn't mind dedicating plenty of space to him.  I don't believe the readers will mind, either.

Despite my own enjoyment of Caesar Maxentius IX, I know people are reading this for more Zeus, et al, and Cylons.  I felt duty-bound to get to them as soon as possible, so the creation of the Titans comes fairly early on.  (And the birth of the Olympians shortly after that.)  The bulk of the book is Titans vs. Olympians.  That's the whole point, right?

I was about a month into it when I realized I was falling into the prequel trap.  I was spending too much time with new characters and, as a consequence, the characters people wanted to spend time with were being shunted further and further back.  So I began to trim.  I had to be careful, though, as I needed to build the world.

Book One spends a good bit of time building the world of Kobol in the golden age of the Lords' reign.  When I first published the book, I probably had too many chapters doing that.  In subsequent edits, I removed a few.  It's a tighter book and the world doesn't seem to have suffered.

Book Five is much the same.  The world is very different, though.  It's not a world unified and buoyed by the gods.  I spent too long building corners of the world that could have been taken care of more organically as the story progressed.  All's well now and the book is shorter for it.  (Not much shorter, though.  Frak.  I'll discuss that at a later time.)

But there's a tiger in our faces.  I need to mention it. 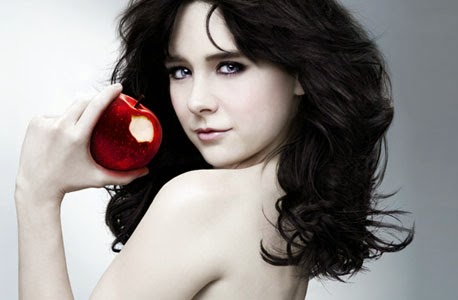 Caprica had very large shoes to fill, coming after BSG.  Unfortunately, the show seemed to spin its wheels for the first third or so of the season.  They got lost in world building and in character building, too.  They had a hard time getting the characters to a place where the audience truly wanted to spend time with them.  It's a shame, because they began to find purchase and gain ground in the latter part of the series, which, of course, was too late.

How did Caprica fare against the prequel problem?  Well, they avoided having any characters from BSG in it (though they did have the family members of some).  The entire show was made up of new characters, some of whom clicked better than others.  They jumped into it, whole hog.  Props for the attempt.  If the early going hadn't seemed so slow and had "SyFy" treated it better, I'm sure we'd have a few seasons of a good-to-great prequel to reflect upon.

More posts coming soon ... including maps, mythology, and the problem with Galactica.
Posted by ety3rd at 11:19 AM No comments: