I was almost eleven in 1986 when Challenger was destroyed seventy-three seconds after liftoff.  It affected me deeply.  I sent a letter to NASA asking for a photo and they sent one of the crew, not unlike this: 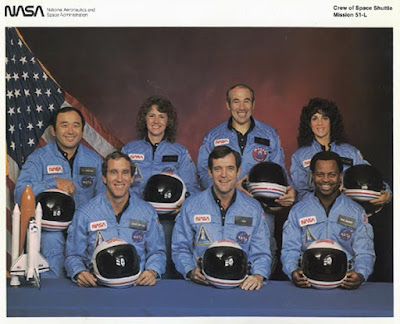 It hung on my bedroom wall for years and I learned all their names.

Today's the thirtieth anniversary of the accident.  I remember standing in line in the auditorium of Coates Elementary School, waiting to file into the cafeteria, when our teacher, Mrs. Fawcett, came from the teacher's lounge and told us what happened.  (I know many students actually saw it live at school, but we didn't.  Science wasn't a big priority for our school.)

Fast forward to today.  I saw a post on Reddit that discussed how NASA originally intended on sending Big Bird into space in order to spur interest among children, but when they decided it wouldn't work, logistically, they decided to use a teacher, instead.  Then someone suggested that NASA should have sent Santa Claus if they wanted to capture children's imaginations.  After that, someone wondered what that would have been like and said it'd make a good writing prompt.

I took the bait and wrote the below ... click the JUMP: