My new book goes live on Monday, December 5.  Without giving much away, it's science fiction.  Kind of a mystery.  Lots of action.  I'll have more details about it and its making in the coming weeks along with some maps and charts, of course, but for right now, here's the first chapter after the JUMP. 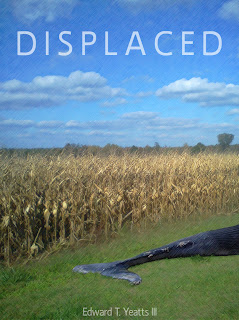 Wilson began to stir; his face nestled comfortably in the white pillow.  He licked his lips once or twice and kept his eyes closed.  His head was throbbing and he pulled himself erect.  This is when he noticed the seat belt.

He was firmly strapped into his car and the pillows surrounded his entire body.  By now, he opened his eyes and realized every airbag in the vehicle had deployed.  He then noticed the dinging of his car.  The Toyota was telling him the keys were in the ignition, but it wasn't running, even though it was still in gear.  He turned the key back and then braced his hands on the wheel and tried to push himself level.  It was difficult because the car was at a forty-five degree angle to the ground; its nose pointed down.

Wilson reached into his pocket and pulled out a small utility knife.  With a quick flip, the blade extended and he punctured the bag in front of him and the ones along his left side by the door.  He exhaled forcefully to avoid breathing in the excess gases and he swung the door open.  It fell all the way forward and rocked the car slightly when it stopped.  Wilson replaced the blade and put it back into his pocket.  He leaned part of the way out of the car so he could reach into his back pocket and get his phone.  When his fingers found the device and pulled it out, he opened his eyes and saw the road under his silver Toyota.  It, too, was at a forty-five degree angle to the ground.

Wilson let go of the phone and placed one foot out onto the road and looked to the horizon.  Crops surrounded him and tall trees stood a few hundred yards away.

"What in the ..." he mumbled while he emerged from the car and onto the upturned asphalt.  Wilson steadied himself by holding the opened door, but he never took his eyes off the horizon.  He looked back at his feet and saw the edge of the slanted road a few yards away to the left of the car.  He looked toward the back and he saw that the road continued into the sky for about twenty yards before it simply broke off.  In front of the crumpled hood, there was crushed vegetation.

I was driving, he thought and took a step up the inclined hill.  He pulled the car door nearly shut and then sidestepped his way to the ground just a few yards below.  I was driving home from work and ... what?  What happened?

He stepped onto the flattened plants and saw that the untouched crops around him were about waist high.  Toward the tree line behind him, the crop was taller -- something different from what he was standing on.  Corn?  In front of him, the crops got shorter, until they met a narrow dirt road.  He walked around the front of his car to the left side and noticed for the first time the barns, silos and a house about half a mile away.
Wilson took a few steps and he looked to the right.  Beyond the mass of roadway and rock, beyond the crest of the dirt road, the faint outline of a city appeared.  It was several miles away.

He said, to no one in particular, "Baltimore?"  He was pretty certain it wasn't.

He walked further away from his car and around toward the back.  Wilson looked at the length of road extending up into the air and saw another huge section of asphalt that had simply broken off behind it and collapsed onto the field due to gravity.  He stepped backward through the crops and continued to process the images in his mind.

His car and a long stretch of road were at a forty-five degree angle.  The car was impacted on the ground.  Under the asphalt, large sections of dirt and rock were piled on the field.  A portion of a sewage pipe poked out from the dirt several yards behind the car.  Other smaller pipes dotted the section of dirt under the road.  An uneasy feeling washed over Wilson.  He circled the scene and he began to realize something more than a little disturbing.

The car.  The road.  The dirt, rock and pipes.  It looked as though they had all been scooped out of the ground and then plopped onto this farm land.  It's a bowl.  It was unmistakable.  The material under his car appeared partly spherical.  The edges of the top layer with the road and parts of various front yards were circular.  Portions of the road and dirt had collapsed, but the rounded nature of these objects -- foreign in this field -- was very apparent.

"What happened to me?"

Almost in response, he heard someone exhale loudly.  Instinctively, Wilson crouched beneath the top of the crops and reached for his waist.  His weapon wasn't there.  He looked back to his car but he feared it may be too far away.  Wilson spun around slowly trying to peer through the vegetation and he saw nothing.  Again, there was a loud exhale and then a deep rumble.  It was obvious that it wasn't human, whatever it was.

Wilson stood up slowly and looked around.  Nothing out of the ordinary -- except, of course, for the mound of road, dirt, rock and his car.  Again, he heard the rumble and Wilson began to walk toward it.  The sound was farther away than it seemed initially and before long, he was entering the taller corn crops.  He parted the stalks in front of him as he walked.  Just after another loud exhale, his feet squished into the ground.

Wilson looked down and saw that the field ahead of him was saturated with water.  Behind him, dry as a bone.  He stood there on the border of wet ground and dry ground and again tried to process what was around him.  He blinked a few times, slowly, and then another deep rumble reminded him to press on.  He continued to squish through the damp crops and he saw a partial clearing ahead.  His feet sank slightly as he continued.  Again, there was a loud exhale and Wilson emerged from the corn.

That's when he saw the whale.