Why You Should Rethink Buying 'Star Trek Into Darkness'

Look.  I've been a Star Trek fan for all of my 38 years.  It pains me to even suggest this ... but I might not be buying Star Trek Into Darkness when it comes out.

It has nothing to do with "John Harrison," the action-over-substance argument or any of that biz.  It's all about Paramount, Bad Robot and how they decided to treat their customers. See that?  That's a fancy set, complete with a QMx replica.  I really wanted that phaser.  The whole thing costs about $80.

I preordered that months ago.  Over the weekend, I cancelled the order.

Why?  Because the Blu-ray it comes with doesn't have all of the features that it should.  Sounds petty, perhaps, but to a videophile and completist, it's damn near a sin.

You see, they produced hours of bonus content for the video release including all the requisite behind-the-scenes stuff and an immersive commentary.

What you get on that phaser set's Blu-ray is the same thing you'd get if you just bought the plain movie straight out: about thirty minutes worth of features.  No commentary.  Still missing about an hour or more of other features. See that?  It's a near-priceless set.  The "Meteor Edition" they're calling it.  You have to enter to win that piece of space rock shaped to look like an insignia because they only made one.  What special features come on its Blu-ray discs?  The same as on the plain-Jane release.

So where did the commentary and the other stuff go?  Retailer exclusives. No, that's the Walmart edition.  It's a plain-Jane movie set with a Hot Wheels Vengeance model.  Nice, but we know the other stuff is out there. Ah, Target.  Target, in the US, gets about 45 minutes of the missing bonus materials, in addition to the original plain-Jane's 30 minutes.  No commentary.  And still missing about forty-odd minutes of stuff. Oh, great.  Best Buy has the other features.  Joy.  Even worse, the extra extras don't come on a bonus disc.  No, no.  Best Buy wants to force you to use their crappy streaming service, CinemaNow.

So where's the enhanced commentary?

Swell.  That's an iTunes exclusive.  Oh, and look.  It even shifts to IMAX ratios during the appropriate scenes ... UNLIKE the Blu-ray.

"But that enhanced commentary ... they stop the movie and zoom in and do all kinds of things they don't do on normal commentaries.  Surely they can't do that on a Blu-ray." - Wrong.  Warner (again) has done it before with something they call "Maximum Movie Mode."  It's like a branching DVD to the Nth degree.

Why are my panties in such a bunch over this?  Because I'm a loyal, paying customer.  That's why.

Instead of doling out these features to retailers to make them feel special, they should have accumulated them to make me, the guy with the money, feel special.  This is a major release with a built-in audience and we've come to expect discs full of content, especially after 1) the great 2009 Star Trek Blu-ray release and 2) hearing that JJ and crew were making hours more of bonuses for the Blu-ray.

Look, when it comes to Blu-ray releases, I'm an easy lay.  You put everything in one special edition set and I'll pay whatever I have to for it.  $30?  Done.  $40?  I'll hesitate for a moment and then buy it.  But you're, instead, spreading everything I want out so that I'd have to buy it three times, spending upwards of $70, being triple-dipped in the process?  Never mind the fact that the presentation we're getting on the medium for the best presentation (the Blu-ray disc) is lacking in that presentation (no IMAX shifting; no commentary; streaming extras).

You might be saying to yourself that streaming is where it's at ... but it's not.  Certainly not right now.

The numbers tell us that the rental market (remember Blockbuster?) has moved to streaming.  The physical home video market, though, is still doing well.  Couple that with my desire to have the movie to watch when I want to watch it and in the best possible quality ...

Streaming, currently, can't give me 1080p all the time.  My cable company's speeds change depending on my neighbors' usage.  Netflix sometimes pulls titles out of rotation.  I can't rely on streaming to watch the movies I want and in the best way.  And when it comes to special features, I don't want to have to search YouTube for them and see them in less-than-perfect quality.

As a videophile and as a fan of the movie you want me to spend money on, it makes no sense whatsoever to hold back on features and to not present them in the best possible manner.  On this point, Paramount has failed utterly.

(Pics and some details from TrekCore and Digital Bits.)

Digital Bits' Bill Hunt participated in a podcast and it was discussed at length.  There's a download of the podcast and a text transcript available here.  In that podcast, he notes that he has spoken to folks at Paramount and they, A) were surprised by the backlash and, B) now know they have a problem.

Hopefully we can get a full, high-quality release sometime soon.
Posted by ety3rd at 6:04 PM No comments: 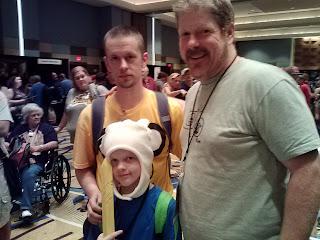 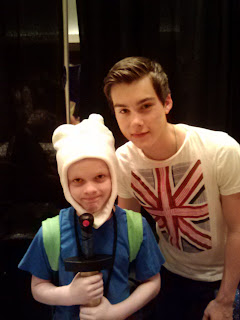 That's my boy, James, cosplaying as Finn and meeting the voices behind the title characters, John DiMaggio and Jeremy Shada. They were as nice and funny in person as you could ever hope.

They asked people to line up for questions, kids first, and James said, "I have one."  I asked what it was about and he said, "The King Worm."

Now, I'm old enough to remember Shatner's famous "Get a Life" speech on SNL and the simple reality that the actors on a show don't necessarily have all the answers on the show's mythology.  But I said he could go ask anyway.

I wish I had been recording.

Here's his question, paraphrased: "In one old episode, it ended with Finn and Jake being hypnotized by King Worm.  Then, in a new episode, a few seasons later, they were in a dream and they fought their way out and killed the King Worm because he was hypnotizing them.  Does this mean all of the episodes before weren't real?"

There were a few audible "whoas" in the audience and Jeremy and John slowly looked at each other.  John said, "I'm leaving," stood up and started to walk off stage.  Jeremy said, "Kids ask the best questions."  The audience applauded.

I'm an idiot for not videoing this.

Someone in the audience piped up and said, "Pen says no."  (I have no reason to doubt him, but I didn't find an official word on the subject.)

After that, John relayed his theory that the whole show is really the imagination of a dying child in a hospital whose only comfort is his dog.  (Yikes.)

Then James was congratulated for stumping the panel and he got more applause.

Thanks to Star Trek and Doctor Who, he's got a mind for paradoxes, I guess.

I also bought John's con-exclusive documentary, I Know That Voice ... all about voice actors.  As thrilled as I am to see it, finally, I'm not sure I want to know what Frank Welker really looks like.  Still, I'll watch it soon.  Here's the trailer: