Don't worry.  NO spoilers for The Dark Knight Rises follow.  I haven't even seen it yet. 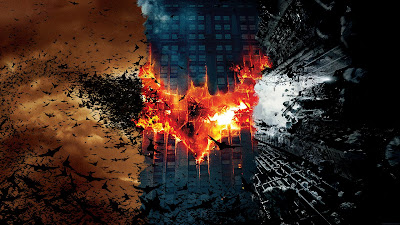 Here's a little something for your "out-of-office" emails tomorrow:

Next, here's an observation I made after seeing an episode of The Twilight Zone: This is a still from the 1964 Twilight Zone episode “Caesar and Me.” Jackie Cooper plays a down-on-his-luck ventriloquist with an evil (maybe possessed) dummy named “Little Caesar.” Obviously modeled on gangster Al Capone, the dummy even has a scar on its face. The dummy talks the man into committing crimes. This is a still from an episode of the fantastic Batman: The Animated Series. The man is The Ventriloquist and he first appeared in print in 1988. The dummy is named “Scarface.” Obviously modeled on gangster Al Capone, the dummy even has a scar on its face. The dummy’s personality derives from the cracked psyche of the operator and it convinces him to commit crimes.

Watching Twilight Zone recently, my mind immediately went to pitiful Arnold Wesker. Twenty-four years separate TZ and Batman and I can’t help but think that a seed was planted …

Next up, here's Jill St. John, who played one of the Joker's hench-people in an episode of old school Batman wherein she doubled for Robin: 
Next, here's a great little video:


And one last thing: I'm still working on Sexcalation ... it's been tougher to write than I expected.

Once I get it finished, edited and published, I plan to turn my eye toward Lords of Kobol - Book Zero.  I'll also be posting random things, too, like the Godzilla board game I made with my son.

Since I'm venturing into erotica, it seemed best to keep it all separated.  This is a post to let you know the other stuff exists.

I have the long-form novel that will be published in the next few weeks.  It's simply titled Sexcalation.  A semi-semi-autobiographical version of (parts) of my life, it's a funny and sex-filled story about a married couple who get involved with their neighbors.  The proper term for their relationship is polygynandry.

In the next few days, I'll be posting the cover for the book and a steamy chapter or two from the novel on the blog.

I've got a Tumblr where I post all kinds of hot pictures and other things of a sexual nature: Sexcalation Tumblr

So, please.  Follow me all over the place, if you will.

As for you scifi fans who aren't interested, don't worry.  I won't pester you with sexy stuff.  And I'll be diving back into Lords of Kobol soon.