Making Rules for Myself

When I was writing the books, there were a few hard and fast rules I wanted to establish for myself.  I'm not talking about the ratio of realistic to the supernatural (that's in a different post); I mean certain things I would and would not do.

Naturally, there are SPOILERS ahead for the Lords of Kobol series, as well as BSG itself. 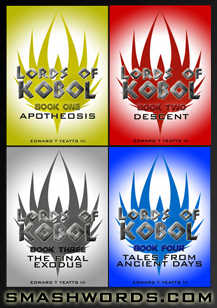 RULE #1: Preserve the uniquity of Hera.  At no point was there ever going to be a Cylon-human hybrid baby.  Period.  She's the Mitochondrial Eve and I wasn't going to take that away from her or the show.

RULE #2: Preserve the uniquity of Kara Thrace.  I view Starbuck as a resurrected person; something truly unique in the BSG-verse.  I don't believe she's an angel because she had no "powers" and no knowledge beyond anything in her fleshly life before "Maelstrom."  The fact that The One would do something so drastic -- a direct interference in mankind's lives -- points to desperation.  There were only a few thousand people left so maybe The One needed to pull out all of the stops to make sure everything worked out.  At any rate, things in Book Three didn't get that desperate.  I felt no need to try and replicate this.

RULE #3: Preserve the Pythian cycle of time.  All these things have happened before and all these things will happen again.  Pretty simple.  Provides a good story structure.  The basic cycle seems to be this: humans create artificial intelligence, the AI revolts and destroys their makers/civilization, a remnant escapes to land somewhere and the cycle starts anew.  My desire to follow this cycle eventually led me down the wrong path and necessitated the creation of ...

RULE #4: Preserve the uniquity of Earth II.  If you've read the deleted scenes post, you know that I frakked up and had the Olympians fleeing Larsa, a planet on the other side of the galaxy and finding Kobol, a planet where primitive humans already lived.  It wasn't until I reached Zeus' big speech to the Olympians that I realized the error of this ... it showed that there was a "divine" hand involved (much like Baltar said when finding humans on Earth II).  As such, this undermined Zeus' position and boosted Prometheus'.  So Larsa became Kobol's distant past.  My desire to follow Rule #3 so precisely caused me to err.  I never considered that the planet people fled could also be the planet they lighted upon anew.  Long after I corrected this error, I devised the first chapter of Book Two which showed The One placing the seeds of sentient life on Earth II.

RULE #5: Don't be cute.  No "Adama" or "Roslin" forebears.  No big winks at the reader.  I think I accomplished that.  For quite a while, the gunships built and launched with the exodus (such as the Adrestia) in Book Three were called "gunstars," but I thought that was a bit too close to a wink.  (Though I wasn't opposed to it because of The Last Starfighter connection.)  There are a few in-jokes, slightly repurposed lines from Star Trek, Star Wars, Lord of the Rings ... MST3K fans probably had a good laugh when I began a chapter in Book One with, "Watch out for snakes."  But that's about as far as I was willing to go.

RULE #6: Don't explain God.  This one is covered rather thoroughly in my text-dense treatise on Theology in BSG, Caprica and Lords of Kobol.  I never wanted to explain what God was, but after I wrote the first chapter in Book Two (the last thing I wrote for the trilogy), I kinda decided I could bend this rule by writing Book Four.

That's pretty much it.  Other than maintaining these rules, the biggest thing I had to do was connect the dots from the show, and I've already discussed how I've done that in earlier posts.
Posted by ety3rd at 9:23 PM